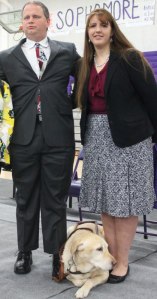 Bobby Lakey and his wife Robin and his seeing eye dog.

The Bonham Education Foundation was formed in 1999 with the distinct purpose of assisting the Bonham Independent School District in preparing our students educationally for life and career through encouragement and recognition. The goal of the Foundation is to promote academics and to recognize the students at BHS who achieve academic excellence.

The Bonham Academic Excellence Awards Program is a community project that rewards BHS students who have demonstrated consistent and outstanding academic achievements. Students must maintain a 4.0 GPA or above throughout the full year of academics to be eligible. This award is for academic achievements only. Qualified students are awarded an academic stadium blanket in the fall following the year in which they first qualify. Students who qualify in subsequent years will receive patches to place on their blankets.

During this year’s ceremony, the Bonham Education Foundation recognized 53 seniors, 52 juniors, and 42 sophomores for reaching the 4.0 or higher GPA during the previous academic year. These students were presented their blanket or patch by Bonham ISD Assistant Superintendent Kelly Trompler.

Guest speaker for the program was 1989 Bonham High School graduate Bobby Lakey. Lakey’s former teacher Sue Ann Simpson recommended him as a speaker for the ceremony due to his ability to fight through major life obstacles and succeed in his time at Bonham ISD, in college, and in his career.

Lakey lost his eyesight at 7 years old as the result of an accident. Lakey did not allow this tragedy to take over his life and stop him from succeeding. He was focused on making the best of the situation and at the age of 7 that started with constructing a bicycle.

As he entered back into school, his 2nd and 3rd grade years he was learning Braille and in mostly resource classes. He was the first blind student to be enrolled at Bonham ISD. In 4th grade, he was moved to mainstream classes where he continued to defy the odds and was determined to move forward and succeed. In the 5th grade, his teacher Mrs. Caylor challenged him. She tutored him after school and pushed him to move past the disability and excel in school and in life. By the 7th grade, he was one of the top students in his class.

As Lakey entered high school, he was met with an entirely new set of challenges. He was unable to participate in many activities like athletics and ag, but he chose to focus on moving forward. He then challenged the students at BHS to do the same. Lakey went on to graduate from BHS and registered for classes at the University of North Texas. Yet another milestone reached due to his constant fight to overcome challenges.

Leaving Bonham and moving to a large university in a large town scared Lakey. At this point, he decided he needed to get his first seeing eye dog to help him venture through campus and town. The plane ride to New Jersey was a pivotal moment in his life. He was invited up to first class by another passenger, who happened to be blind and also an attorney. Lakey was captivated by the success that this attorney was able to achieve as a blind person. It struck home again as he was leaving the plane and the attorney assisted him in defying the airline’s policy and not allow the attendant to push him to the terminal in a wheelchair.

Lakey went on to graduate from UNT in four years, much faster than the seven year average for most blind college students. He earned his BBA in Personnel Management and Organizational Behavior and continued on to complete a two year Executive Leadership program at the University of Oklahoma. He worked as an Employment and Technology Specialist for the DARS Division of Blind Services for 11 years and is now is the Freedom Scientific Director of Sales for the Central US.

Lakey lives in Prosper with his wife Robin and 6-year-old daughter Madison.

“As long as you keep trying, you never know what might happen to allow you to succeed,” Lakey said. “Focus on moving forward and flying high,” he challenged all BHS students.

Lakey was presented an honorary Warriors jersey for speaking during the program.

The Bonham Education Foundation offers annual scholarships to BHS seniors and recently awarded $4,000 in grants to BISD teachers for innovative academic projects and programs aimed at enhancing the academic experience of Bonham students through the whole range of primary, elementary, and secondary education.

The Bonham Education Foundation is a nonprofit 501(c)(3) organization with the goal of promoting excellence in education in the Bonham Independent School District.